In a previous post I promised to explore how we can use the statistics package R to produce estimates for the relative proportions of Republicans, Democrats, and unaffiliated and other voters within the total population voting in the 2010 general election. However I spent all of last post on the preliminaries: how to download and install R, and how to load into R turnout data from past Howard County gubernatorial primary and general elections. In this post we can start doing some real work.

First, let’s restart R and make sure we have the data we’ll be using. If you told R to save your workspace at the end of your last session, then R should automatically restore that workspace, including the turnout data, when you start it now:

If you didn’t save your workspace, or if R doesn’t restore it for some reason, then you can reload the data following the instructions in the last post. Either way, when you’re done you should have two variables (“data frames”) that contain the data of interest, hgp for the primary election turnout data and hgg for the general election turnout data. You can use the ls() command to verify that the variables are present, and enter the variables’ names to print their values (here I show the data in the data frame hgp):

OK, can we start estimating now? Not so fast… Let’s first devote a bit of thought to what we’re trying to estimate, and what general approaches we might use to do it. Recall that our previously-stated goal was to estimate the relative proportions of Democrats, Republicans, and unaffiliated and other voters voting in the 2010 general election. Why these particular values? Because they are typically used in political polling when constructing a sample of likely voters. Obviously polling a sample consisting of 90% Democrats would produce a biased result, as would polling a sample consisting of 75% Republicans or 50% independents.

How might we go about estimating these values? Assuming we’re not just going to use our gut (“feels like a tsunami this year”) we should try to use the data that’s available to us. But what data? In our case we have in essence four separate data sets: turnout data for primary elections in presidential years, data for gubernatorial primaries, and turnout data for general elections in both presidential election years and gubernatorial election years.

R can generate very complicated and professional-looking plots, but in this case we get the following barebones but nonetheless useful graph: 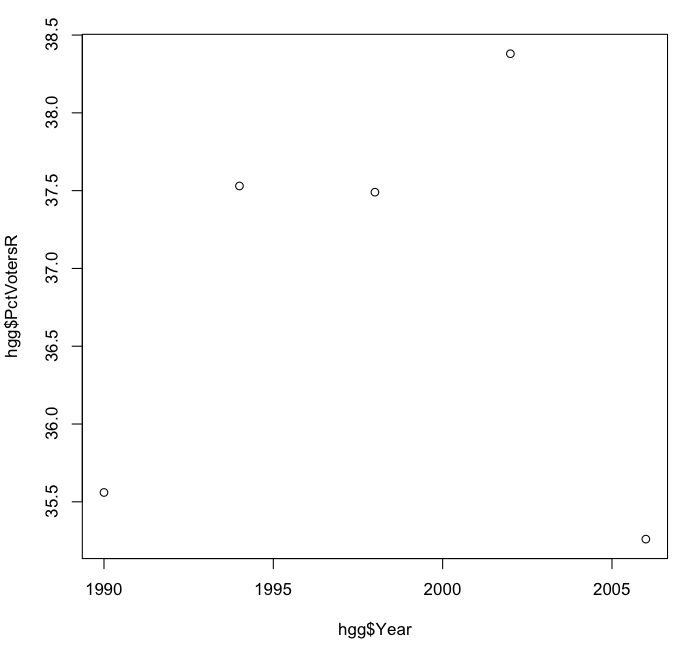 It’s hard to discern a trend here. It looks as if the percentage of Republican voters was rising from 1998 to 2002, only to drop off in 2006 to its original level. The vertical scale of the graph exaggerates the relative differences from year to year, so let’s redo the plot, this time using a vertical scale from 0 to 60 percent.

Here the ylim parameter sets the range of values on the vertical (y) axis to 0 on the low end and 60 on the high end. The value c(0,60) is a list of two numbers (a vector in R terminology) concatenated together (where the c comes from). 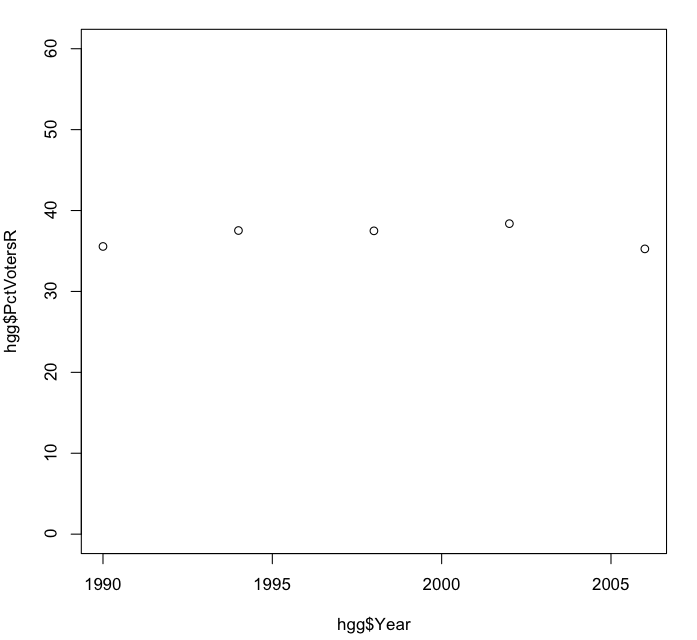 Notice that in this plot the percentage of Republican voters appears relatively static, fluctuating somewhere between 35% and 40% over the years. We can get a bit more specific about this by computing the mean and standard deviation of these values:

The mean of 36.84% is what’s more commonly known as the average: the sum of all the percentages of Republican voters in the five gubernatorial elections, divided by the number of elections. The exact computation of the standard deviation of 1.36% is not important for our purposes; we can use it simply as a measure of how tightly or loosely the various values are clustered about the mean. (If you’re interested in how standard deviation is computed, see the relevant section of the associated Wikipedia article, and note that what R computes is what is technically known as the sample standard deviation.)

If the percentage of Republican voters from election to election were truly fluctuating randomly in a certain way (in statistical terms, if it were a random variable with a known distribution, e.g., a normal distribution) then we could use the mean and standard deviation together to make relatively strong predictions about the likely value of the Republican percentage of the vote in 2010. For example, we could define a 95% confidence interval like those we discussed in relation to polling margins of error, i.e., a range of values around the mean value, with only a 5% likelihood that the Republican percentage of the vote would fall outside that range.

In this case we don’t know whether we’d be justified in making such predictions or not. However it was this computation that originally made me somewhat skeptical of the Republican percentage of the vote going much above 40% (or much below 35%, for that matter). Whether that skepticism will be borne out remains to be seen. In the meantime I’ll end this post and take a break from R for a while; in the next post I’ll plot the historical percentages of the vote from Democrats and unaffiliated and other voters, and see if they show any clearer trends.