How can Maryland promote job growth and the well-being of its citizens as the economy languishes and Federal spending shows every sign of declining, never to rise again? Should Maryland seek to model itself on its next-door rival, Virginia, or even on Texas and other states in the south touting themselves as business-friendly destinations? Or is there another way to grow Maryland and make it a better place to live and work, one that takes into account Maryland’s own characteristics and doesn’t try to make it into something it’s not and never could be?

I’ve been thinking about this a while, and was moved to write by the publication by Blueprint Maryland of a draft report (PDF) summarizing comments by people attending a series of roundtables on how Maryland can adapt to the changing economy. (One of these roundtable events was held last month in Turf Valley, and another at the BWI Marriott. Perhaps some of the readers of this blog attended and could comment on them?)1

The draft report is well-worth reading in whole but by its nature it’s somewhat disjointed, reflecting as it does the many and varied comments of the people who attended the roundtables. Rather than discuss each of the many ideas contained within I prefer to step back a little and try to provide a high-level vision of what I think Maryland should be doing to transition to a new 21st-century economy. So without further ado here’s my own napkin sketch of what a blueprint for Maryland could look like:

First, although we can and should learn from the experience of Virginia and other states we should ditch the idea that all we have to do is make Maryland more like Virginia. Socially, politically, and economically Maryland is not like Virginia and likely never will be. I moved to Maryland from out of this area, and if I wanted to live in a state like Virginia I would have either gone there to begin with or crossed the Potomac many years ago. I’m sure the same is true of many people who currently live here.

Virginia does what it does very well, and has a well-established state brand that reflects its various aspects: relatively socially and politically conservative, and combining high-tech modernity with business-friendliness in the sense usually used in the U.S., e.g., having low taxes, anti-union measures, and so on. There’s no way Maryland is going to be able to match Virginia in those aspects any time soon, and even if it did historical perceptions would likely still hold sway and limit Maryland’s competitiveness in attracting businesses and people looking for a Virginia-like environment. Why settle for a (pale) copy when you can have the original?

So what we should focus on in Maryland? I think we should take our cue from a statement in the draft roundtable report: A key issue raised [was] the over-regulation in Maryland, and this appeared to be an even greater concern than the high taxes. People certainly don’t like taxes (as evidenced by the recent discussion of a proposed gas tax), but politically there’s little or no chance of Maryland turning into a low-tax haven. So instead of obsessing about taxes why don’t we instead put a major focus on reducing the regulatory burden? This could cover not just the traditional concerns of businesses large and small, but also address regulatory issues that affect both businesses in emerging industries and entrepreneurial individuals (freelancers, people with home businesses, street vendors, and so on), neither of which groups are necessarily well-represented by the existing business lobbies.2

At the same time we could take the taxes we’re not going to be reducing and focus on spending them on the core public goods for which we have government in the first place, including most notably public safety, public infrastructure, and the creation of a healthy, well-educated population that has the personal and family security to take the life chances that will be required to be successful in a 21st-century global economy that would otherwise be very stressful for the middle class and the poor.

If we’re not going to try and make Maryland into Virginia-lite, what should we model ourselves on? Is it even possible to combine a vibrant, dynamic, and relatively unregulated free-market economy with a robust social safety net and other government-funded measures to benefit the average citizen? Wouldn’t that amount to an example of politically crossing the streams? It would be bad, as Egon Spengler warned, even if didn’t result in every molecule in our bodies exploding at the speed of light. But as those who’ve seen Ghostbusters can testify, the plucky band of heroes did indeed cross the streams to great success, averting a disaster of biblical proportions.

In this case there’s an existence proof (as the mathematicians say) not in any U.S. state, but rather in the country of Denmark. For quite some time now various people, including many of the libertarian persuasion like Will Wilkinson, have been touting Denmark as showing that you can have your cake and eat it too when it comes to free markets. Denmark is rated as high or higher as the U.S. on measures of economic freedom published by the Heritage Foundation and others, but at the same time has generously-funded social insurance, public education, and so on; in fact, strictly speaking Denmark is actually significantly economically freer than the U.S. when it comes to regulatory measures, but gets ranked lower than it otherwise might be because of its much higher level of taxation and government spending. 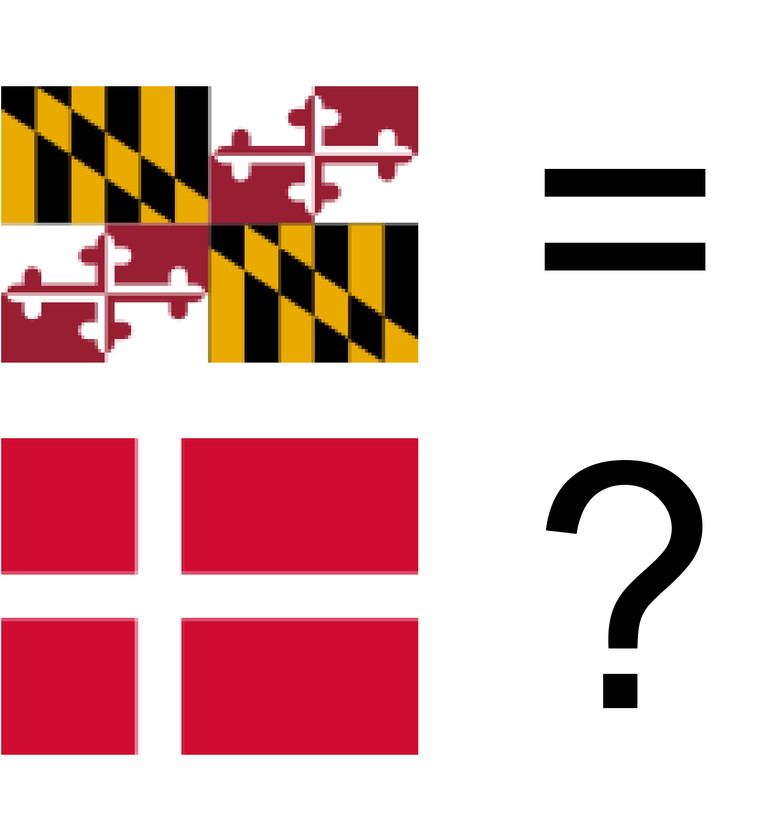 Some people object to comparing Denmark to the U.S. because it’s such a small country. But comparing it to Maryland makes more sense; they’re about the same size (16,641 square miles for Denmark vs. 12,407 for Maryland) and have about the same number of people (5.6 million vs. 5.8 million). When it comes to various measures of economic well-being though Denmark takes the lead: Maryland’s per-capita income is relatively high at $43,500, but Denmark’s is even higher at $56,147; Denmark also has a lower unemployment rate (recently 6.6% vs. 7.5% for Maryland), less income inequality, with a Gini coefficient of 0.25 vs. Maryland’s 0.44 (itself actually fairly low in comparison to the rest of the U.S.), and a higher rate of economic mobility than the U.S. (i.e., the ability of someone to make it from a lower socioeconomic class to a higher one).3

Of course there are also significant differences between Denmark and Maryland: Maryland’s freedom of action is hampered by the U.S. Federal government (Denmark is a member of the European Union but did not adopt the euro), the U.S. and even Maryland political climate is much more hostile to high government spending (the center-right party that until recently ruled Denmark would likely be considered raving socialists in the U.S. context), and Denmark is much more ethnically homogeneous than Maryland (with over 90% of the population being native Danes). That limits the extent to which Maryland could adopt generous social programs to complement a laissez-faire regulatory framework.